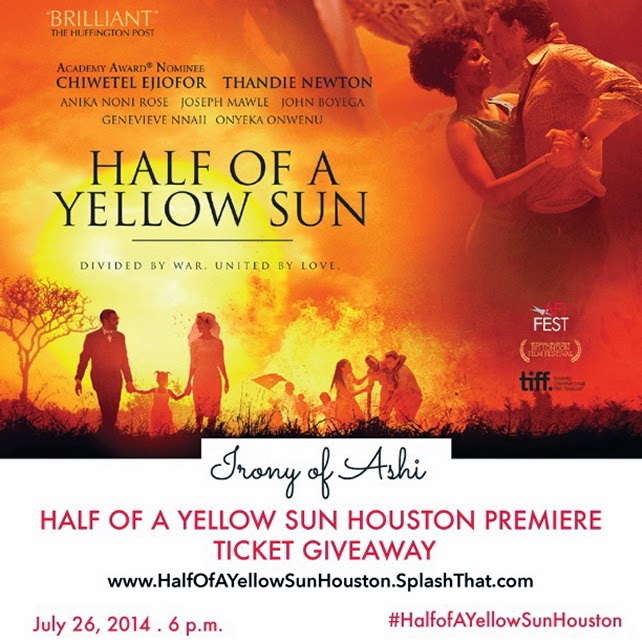 I’ve  heard so much about this movie and  the organizers were kind enough to giveaway free tickets to two  (2) of my lucky readers in Houston. As of right now tickets are now SOLD OUT. You get to go with a friend or a date. Event will take place Tuesday 29th July at 6pm (read more details below)

The Mayor’s International Trade and Development Council for Africa (MITDC-Africa) would like to announce the screening of the independent Nigerian film, “Half of a Yellow Sun,” which will be held on Tuesday, July 29, 2014 in the Museum of Fine Arts Houston, immediately preceded by a VIP networking reception with leaders from Houston’s prominent civic and business institutions.

To sign up for the waitlist, please visit www.halfofayellowsunhouston.splashthat.com.
“Half of a Yellow Sun” has received worldwide acclaim and has been screened in several U.S. cities including, New York and Chicago. The movie is part of the rich cultural cannon of Nigerian film and entertainment and heralds a coming out of Nigeria’s “Nollywood”, the second largest film industry in the world, here in Houston. This special screening is presented to celebrate the rich connections between Houston’s Nigerian community and the larger Houston business and cultural communities and to increase the visibility of Nigeria’s film industry in Houston.

Thank you for participating!  Good luck!